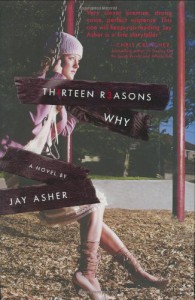 What an amazingly beautiful, powerful novel that will completely break your heart into tiny pieces and gives you only the smallest band-aid to put it back together.

Jay Asher's debut novel is so perfectly done it made me want more. The story was beautiful written and in a way that left the most powerful of effects. The juxtaposition of the feelings and thoughts that both Hannah and Clay were having to the situations Hannah was describing gave me the chills. Asher really got deeply into the character of Hannah. Her pain was apparent and through that pain you could feel Clay's longing for things to get better knowing full well that it wouldn't. What got me the most about this story was the fact that every single person that was included in Hannah's "Baker's Dozen" never even knew that they affected her the way that they did. They never knew that their actions would have a reaction and that just broke my heart. Each story was a little piece of what made Hannah Hannah and in the end what was her demise.

Clay's story with Hannah was probably the one that broke my heart the most because it was filled with some many "if onlys..." that would never be answered. There were some many chances to make things different and yet everything stayed the same.

Definitely a deep read, but one I would do again in a heart beat. Mr. Asher, you have a fan in me!
Tweet