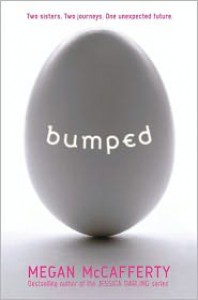 It took a little while for this book to intrigue me before I actually decided to add it to my to read list. I wasn't sure if I would find the premise all that realistic. I thought it could be gimmicky. But after some small prodding and suggesting I caved and added it. And then when I got a great deal on it for an eBook, I bought it right up. And so glad I did.

The story of Melody and Harmony isn't one that is easily forgettable. Identical twins, separated at birth, sent to live in two different environments. The devil and the angel if you would. Harmony grew up very religious and God fearing, while Melody grew up in a place that is full of teenagers getting pregnant for profit. Both girls are from opposite ends of the spectrum yet they share one thing in common, their face. After some initial awkwardness things happen between the two of them that will forever change the people around them and themselves for a long time to come.

When I first started this book I found Harmony over the top annoying with her preacher like attitude. But as the book progressed I actually became fond of her. I started to pay attention to what she was saying about Goodside and I started to realize how cult-like it had been. She was just behaving how she had been taught and there was nothing really behind that. And Melody I liked right away. She was a straight shooting average teen that had made choices based on her parents and what they wanted her to do. Actually the more I examined the girls the more alike I saw them to be.

This book was a story of figuring out what you want and making choices for yourself and not for any one else. With the help of Jondoe and Zen this girls did exactly that damn the consequences. In the end I really found myself loving this book and I can't wait for the next chapter for these two remarkable girls.
Tweet