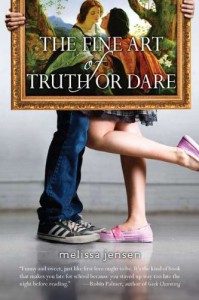 I have to be honest, I went into this unsure. I had heard a varying degree of things on this book from good to bad, but I had wanted to read it so I stuck with my guns and did it. And what a disappointment it turned out to be. I mean how can you go wrong with a book that is supposed to be Anna and the French Kiss meets Pretty in Pink. Sure I didn't like Pretty in Pink, but I get the appeal. Sadly The Art of Truth or Dare was nothing as advertised. It took 200 very wordy pages to get what I actually thought the book was about. Instead of a cute story about two people from opposite backgrounds finding each other in a random coincidence, it was a story about a long deceased 19th century artist that Ella had a weird, weird obsession.

The book started out very quirky in the first chapter. I knew the readers were being played with a little so I kind of got excited thinking the negative I heard was wrong. But as I read further and further and Edward Willing became a bigger and bigger part of the story with no real Alex insight I found myself getting frustrated. I expected some art, the cover alone gives that away, but the over abundance of Edward Willing was entirely too much. By the time I got to see Alex and Ella really interact the book was more then half over and I s just aggravated.

Honestly Ella was plenty enough to carry the book, actually she was more then enough. She was quiet and shy and scared of what people thought of her thanks to a noticeable imperfection. She had a crazy Italian family, sometimes interesting friends and typical teenage thoughts. She was the reason I didn't put the book down. I liked her and I liked her liking Alex. The whole book should have been devoted to that and it would have gotten the point across so much better. Instead I couldn't tell you what the point even was. I know it was there but I just couldn't grasp it because of all the Willing talk. It was just too much and bothered me.

I will say like it has been said...every book has a reader. I just wasn't the reader for this book. Maybe you are, but just be warned it is slow going if you are looking for cutesy romance. I am curious to read Jensen's other book.
Tweet