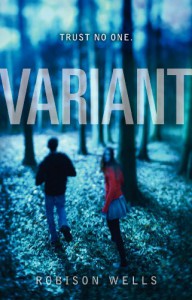 Wow that was one of the most painful reads I have had in a long time. I had such high hopes for this book and I was sadly disappointed. It was wordy and lacking and just took a really long time to get to what I assume was the point. I don't know what I expected, but it certainly wasn't what I got. I felt like I was reading a watered down version of Gone and Maze Runner as soon as I opened the book. It was almost the exact same idea with just a few tweaks and not done nearly as well.

I guess the characters and their actions were what bothered me the most when I think about it. No one seemed to actually want to get out and for the life of me I couldn't figure out why that was. They were being kept as prisoners with no explanation as to why and yet they were not trying to make a plan to escape. It wasn't until Benson came in that things were set in motion. I also couldn't figure out why the "gang"(don't even get me started on that aspect) Society was just helping the captors out without even flinching. It just didn't all add up. I mean that could be because I felt no connection to any of the characters at all and honestly didn't care of they got out. I just didn't buy any of their so-called relationships so it was hard to even care what happened to them. Becky and even Benson to an extent may have been the only characters with the least bit of personality and I still didn't even like them all that much.

The other thing that I wasn't really crazy about was the so-called twist. It was definitely interesting, but by the time I got to it I cared so less for these people that it kind of just fell flat. I can totally see why people say the twist is good. It would have been in another other circumstance, but it is all about timing for me and the timing just wasn't good so it took away from what my reaction could have/ would have been.

Basically it really was a disappointment. I wanted to really like it but it just didn't do it for me. I have the next book on my to-read list but I just don't know if I can put myself through this again. But I am very very grateful to be done with that one and moving on.
Tweet