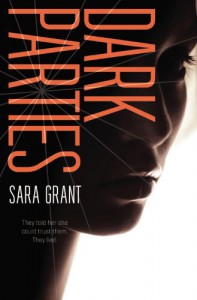 I'm not really sure how I felt about this one. I liked the idea and the way the story was old at parts, but I couldn't shake the feeling that the book was a combination of Birthmarked, XVI, and Bumped. There were so many elements from all those books that I had a hard time separating them from each other. Sure the main story was a little different, but I just couldn't help but see other dystopian stories I loved in the pages of Dark Parties and it kind of took away from it or me.

I was also confused by Neva at times. Don't get me wrong, I loved her as a character, she was the best part of he book, but she was contradictory at times and it bothered me. At the very beginning of the book, at the one and only dark party, she tried to stop Sanna from getting their revolution in motion. She didn't want to continue with there plan and then in the next breath she was leading it. I just didn't get the fast change of heart. I get fear, but that isn't the emotion I got from Neva at all. She was more in doubt and then she wasn't. It was just too quick of a turnaround. But other then that Neva was a great character and I really liked her relationship with her mom and even with Braydon. Both felt real which made Neva feel real. By the end she believed in something so certainly that she was willing to give up what meant most to her and that I can get behind.

I will admit I was disappointed in the ending. With all the time used to set up the story the ending was very rushed and predictable. All of the "twists" I saw coming a mile away and wasn't surprised in the least by them. I almost wish the beginning was shorter so the final part of the book didn't feel so forced. I guess in the long run I just wanted more.
Tweet