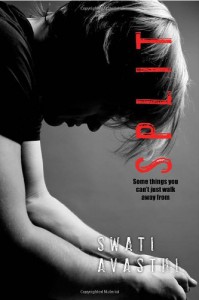 Sometimes there are books that are so real that it takes time to get your thoughts into order. Split was one of those books! Usually I am the type of person that needs to write my review as soon as I'm finished for fear that I won't get the proper emotions down on paper. But with Split I needed time to sleep on it and let the emotions of the book settle and marinate in my head.

Simply put, Split was FANTASTIC! It was an amazingly written look into the life of domestic abuse and how it effects a family and what it means to get out. But there was nothing simple about this story or its awesomely complex characters. To just say it was fantastic is not really giving it the justice it deserves because really the book was way more then fantastic could ever mean.

Split is the story of Jace, a 16 year old kid that seen abuse and violence his whole life. He watched his mother get beat and his older brother provoke his father just to keep his mother safe. It was all he knew so when his brother left home and went into hiding 5 years prior, Jace took on the roll of protector. Then one awful night Jace finally fights back and before he even can feel the beating he is out on the street and ends up on his brother's doorstep. Not wanting to talk about the past and what lead Jace to Christian's door the two of the navigate a slippery slope of being brothers, roommates and complete strangers. They are desperate to forget what brought them to this point but soon it is made very clear to them that you can't outrun your past no matter how far you go.

Really what Split did was give an amazingly compelling look into the effects abuse has on a family. The way the abuse effected both Jace and Christian, in completely different ways, was a true look at how people handle situations differently. First you have Christian who was the first to get out. He was the one that took it first to save their mother. He took it for as long as he could, provoking but never fighting back, until he had to make a choice for himself and that was to leave. He pushed his whole family behind him and started a knew life for himself. And then there is Jace. Sweet, adorable Jace. Left to be the sole protector for his mom he did everything he could to save her. But unlike his brother he fought back and he fought back hard. And unlike his brother, he didn't leave on his own. He didn't want to leave his family behind but he had no choice. Too much was at stake if he didn't.

Honestly it broke my heart to see Jace struggle. He struggled over an incident that happened at home, he struggled about leaving his mother, he struggled about relying on the brother that left him. He was trying to do everything he could to keep it all together but he still had a massive black cloud over his head from home and there was no way he could move on or put himself back together until he dealt with it all. Watching him finally take responsibility for things and to realize there was some stuff he couldn't change was really uplifting. And watching him and Christian find a place of comfort between them and find a way to use each other to heal was miraculous.

Split is one of those books that you will read the description and think you don't want to read something so heavy and depressing so you may pass by it. As someone that once did pass by it, trust me on this, don't! Go to the book store and buy it and read it immediately. You won't be disappointed by the story Avasthi tells. Trust me on that!