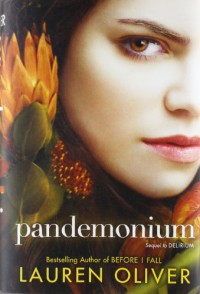 Seldom is there a book that I am so excited for I run out to purchase it the day it’s released. And rarely does that book live up to my expectation. It is like that movie that people tell you over and over to see that gets built up in your head and then after you see it, total disappointment. It has happened to me before and it will happen again so I was worried about Pandemonium. Did I put too much stock into it? Would it be a “sophomore” slump sp to speak? With the amazingness of Delirium it had pretty big shoes to fill. Well, Pandemonium filled those shoes and more! It was absolutely everything I wanted it to be an more! It hit all the points I was hoping for, had the growth in the character of Lena that I was looking for and yet left me aching for more, more, more. It did EXACTLY what the second part of this sure to be amazing trilogy was supposed to do; it left me wanting the final piece of the story.

Pandemonium starts off with Lena and where she is now. It has been months since she climbed the fence, months since she watched Alex get shot to save her and she is now part of the resistance. She is undercover in New York doing what she can to help save people from the procedure and to open their eyes like hers were. She has obviously been through a lot since we last saw her, and through a series of Then and Now chapters we get to see what Lena’s life is like now and what it was like when she was in the Wilds. As readers we are taken on a journey of Lena learning how to fend forever herself and how to trust people she doesn’t know all while burying the emotions of the past and trying to forget Alex, Hana and Grace. We learn how she got to where she is and what leaving everything behind has done to her.

Because the thing is, Lena Holoway is not the same girl we knew in Delirium. She is this new person that has to deal with that age old saying…“it is better to have loved and lost then never to have loved at all”. Lena has loved. She loved with everything she could and then she lost it all and everything she knew in one split second. That love was taken from her and so was her right to choose and that changes a person. You see, there was no way for Lena to stay the same. Her eyes were opened by Alex and once that happened she couldn’t go back. Lena had to accept how things are and learn to adapt. The thing is in order to do that she has to push down a tiny piece of herself.

Really it was brilliantly done. The changes in Lena are so subtle, but noticeable. She is no longer the girl that isn’t anything special. She isn’t the girl that is hiding behind her pretty best friend. She is the girl that Alex brought to light, that he taught to fight for her right to choose. She is braver and stronger and aware. She stands taller and swears and thinks things through instead of being told what to do. Like it says in Pandemonium, she was reborn the day she went over the fence and there is no past.

Honestly the whole book was just magical. Right down to the page turning, cliffhanger of an ending. I knew Oliver was going to do it, leave us hanging on for more. I just knew it and yet I was sad, happy, annoyed and anxious when I got to the final page. I wanted to throw the book and laugh all at the same time. Instead I just ended up smiling for a very very long time and I still can’t get the book out of my head. It has only been a couple of days since I read it and I’m already dreaming of a re-read. And that right there is a true testament to the power of her words and a book that will end up being timeless.

There is really a ton of things I can say about Pandemonium. I can go into a ton of details about what the Wilds were like for Lena, the people she encounters, the circumstances that are thrust upon her, and the connections she makes(whether romantic or not), but I just can’t. It would give away too much and you would miss out on a remarkable story. Just do yourself a favor. I know you may or may not know me, but trust me on this…pick up both books, Delirium and Pandemonium if you haven’t already. In my heart of hearts I don’t think you will be disappointed.
Tweet