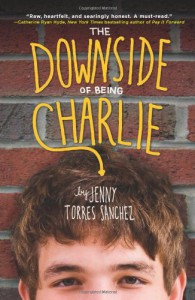 The Downside of Charlie was a book that fell into my lap to read and review. I had never heard of it until a request to read it came in. Reading the description I was quick to say yes. Sounded like a solid concept by a debut author. And I must say although it was slow at times I really enjoyed it and I’m glad I got the request.

The Downside of Being Charlie is the story of well, Charlie, a high school senior that has been anything but poplar this whole life. His best friend thinks he is the second coming of the rat pack, he was over weight, and just never fit in. Now after ‘fat camp’ Charlie is 30 pounds lighter and hopes to have a good senior year. But as the title says, there is a downside to be Charlie. Things just never really seem to go his way. His mother runs away for months at a time, his father is always busy working and he has to share his locker with the nerdiest girl in school. The only bright spot for Charlie is in the form of the new girl Charlotte. But even when Charlotte starts to show interest Charlie can’t help but wait for the other shoe to drop.

One of the things I really liked about this book was Charlie himself. Here he was this poor kid that got the short end of the stick every time. His best friend was the only person he could count on and the great thing about Charlie was that he did. He leaned on Ahmed and told him how he was feeling about things. What Charlie didn’t have was strong parental units. This mother was mentally ill and would walk out on the family more often then not and his dad was never really home. It kind of made me sad that Charlie was all alone. Because of this I wasn’t surprised at all by his extremely low self-esteem. He didn’t have many people that were there to show him he was worth it. It was really sad. But like always Charlie persevered and figured out who he was and who to rely on.

With that said there was a couple of things I didn’t like. First I wasn’t a fan of Charlotte at all. I thought she played games and strung Charlie along. I was never convinced that she really liked him. He was there to pass time for her when she wasn’t with the ‘cool people’. I just found her phony and annoying. I also didn’t like the eating disorder aspect. It felt contrived and it was never dealt with. Eating disorders are very serious and I feel like if you are going to go there, then you need to deliver a solution. You can’t just leave something like that hanging.

With that said The Downside of Being Charlie was a good book with a message of self discovery. It was a quick and enjoyable read. I would say to definitely give it a shot.