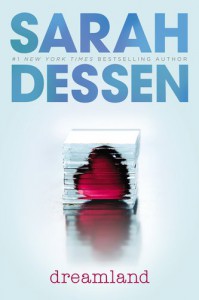 Sarah Dessen, Sarah Dessen, Sarah Dessen! She is by far the queen of contemporary Ya novels. She has this way about her stories that manages to pull you in even when the book a d that characters aren’t your favorite. She once again did it to me with Dreamland. Definitely not my favorite of the Dessen’s I have read but still an emotionally gripping story about not feeling like you are enough, being left behind and abuse. I’ll try to keep the spoilers to a minimum, but with all Dessen books I find it hard to keep my mouth shut.

Dreamland is the story of Caitlin, a teenager whose life was turned completely upside down the morning of her 16th birthday when her seemingly perfect sister leaves home with only a note. With Cass’ sudden absence Caitlin is all of a sudden trying to find her place and fill the void her sister has left. Always having felt second best to Cass Caitlin doesn’t know where she stands anymore. And then one night she meets Rogerson and her life is no longer her own. What starts out as an exciting relationship that is so different from anything her perfect sister had soon becomes abusive and unhealthy. Before Caitlin niws what is happening she has to revolve everything around Rogerson in fear that his next beating will be worst than the last. Slowly she starts not only losing her sister but the parts of herself that made her who she was.

Domestic abuse is always a hard subject to read not matter how old the people involved are. As a reader you don’t understand how someone in that situation can stay. I didn’t get why Caitlin would allow herself to be hurt by Rogerson the way she was. It was hard for me to wrap my head around it. But as someone that has luckily never been put in that situation it is easier for me to be on the outside looking in and saying she should have just walked away. And what I really liked about this book is that not one person said that to Caitlin. People just seemed to understand that leaving a physically abusive relationship isn’t as easy as it would seem to people on the outside and not one person judge her for that. Caitlin was lost enough as it was and just didn’t need the added scrutiny.

What Caitlin did need was her sister. She needed her the morning if her 16th birthday. She needed her when she was being wrapped up in Rogerson’s world. She needed her when her parents were weepy on Christmas because Cass wasn’t there.  For page one I thought Cass was incredibly selfish. I mean as the story went on I understood why she left, but she took the cowardly way out and left her sister to pick up the pieces and in the process alienated Caitlin even more. Their mother was so wrapped up in Cass not being there that she almost completely forgot she had another daughter and that irked me. Was that the mother’s fault, absolutely. But Cass fed into it. She ran like a child instead of standing up for what she really wanted. I just thought she was a terrible sister.

I guess in the long run this just wasn’t the kind of Dessen book I enjoy. Sure it was a quick read and the plot moved along in typical Dessen fashion, but it just didn’t do it for me. There was just too much that annoyed me. But I do give major props for tackling a really touchy subject mater and bringing it to life. Now that right there was what I liked about this story. You read it and tell me what you think!
Tweet