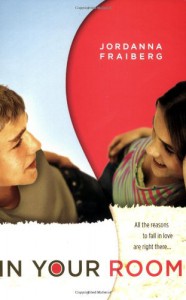 Absolutely adorable! That's really all I can use to describe this fun, quick read. It was concept that was fairly simple and straight forward and used that age old saying to a tee: you can tell a lot about someone from their bedroom.

Basically the book is about Molly and Charlie,two teenagers living in two different states. They have their whole summer planned out until their parents drop a bombshell on them; they have signed up for a house swap and Molly and her family will be living in Colorado for the summer while Charlie and his family will be going to sunny California. Now both stuck in houses that aren't theirs and in rooms that belong to someone else they both start to explore the other a little more. And when they start talking and confiding in each other an unexpected romance blossoms.

Really, I quite liked both Charlie and Molly. Although Charlie was a little stereotypical for Colorado with the biking and nature stuff, he was still likable and his own person. And Molly I liked because she wasn't the in your face vapid California girl. Sure she was into clothes and looks, but she was also into the business part of it too. She wasn't just about the next Prada bag. She wanted to make something out of nothing. Watching these two talk over email and discover something about one and other(even with a lot of major misunderstandings) was truly enjoyable. It was one of those feel good books that shows you really what young love should feel like.
Tweet