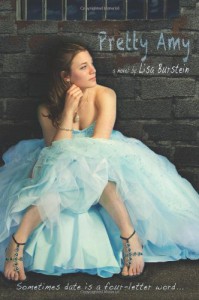 Man, oh man did Amy break my heart! This book wasn’t what I expected honestly. From the description I thought we were going to get a story of whacky hijinks and awkward situations. Instead Pretty Amy was a story about a very emotionally broken girl that hit rock bottom and finally had to decide to put the pieces of her life back together.

The book starts out on the night of the senior prom with Amy and her two “best friends” Lila and Cassie. Lila, the leader of the group and the only one with a boyfriend, has fixed Amy and Cassie up with their prom dates. Unfortunately the girls are stood up and a rash decisions changes Amy’s life. Instead of having the best memories of her senior prom she finds herself in jail and her life at a crossroads. Slowly Amy has to start examining what it truly means to hit rock bottom and is she thinks she is worth it.

Truthfully Amy made me really sad. She was so broken on the inside. She had no self esteem and no emotional support from her family. She had no true friends in the real sense of the word and she worried so much about how she looked to people that she never really got to know herself. Here she was this good, amazing girl and she was wrapped up in her own head that she only saw the negative. She thought she could do no better then Cassie and Lila so she let herself be lead around by them like the dog she so desperately wanted. There was so much more to Amy then a delinquent but with a mother like hers, who plain sucked, and no one to confide in she had no chance of believing in herself. All I wanted o do was so and give her a hug, or better yet yell for Joe to do it because Amy just needed someone to tell her she was worth it. Just a simple sentence a long time ago was all this poor girl needed and it broke my heart that she wasn’t getting it.

Burstein really nailed teenage angst down. I could feel it leaping off the pages as I read. I was slightly disappointed with the lack of romance, because really who doesn’t love a cute boy, but I get why it wasn’t a main focus. Amy had to be the main focus and Burstein did that pretty flawlessly. I wanted Amy to succeed and to see how she was capable of being and I think you will too. I look forward to hearing about Cassie in her next book. What did you think of Pretty Amy?
Tweet