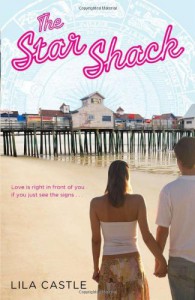 I have to be honest, astrology is totally not my thing. I've gone and done the card readings(I swear they spy at the table to see what you and your girlfriends chat about) and read the whole horoscope thing. I'm just not into it. With that said I'll confess that the astrology aspect of this book was not as annoying as I thought it would be and as it was in the beginning. As the book progressed and I got to know Annabelle and Pete better it kind of became secondary to me. Pete and Annabelle were the main focus. And yes the astrology is what lead to their conflict and awkwardness over the summer, but it also helped them to see where the other was coming from.

That's really what I liked most about The Star Shack. I mean it wasn't the best book every written and I don't think you got to see these characters deeper then the surface, but I also think the characters grew from the beginning to the end. It made the book just an adorable fun read and that is all it was to me. Just something quick and not too heavy.
Tweet