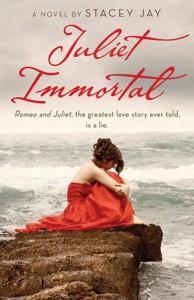 I don't even know where to begin other than saying I loved, loved, loved this book! I know, eloquent right?! HA. But really, here's the thing. I almost never read this book. And now your thinking I'm crazy. Well you see, I am not one for reading paranormalish books. I've done a couple and rally enjoyed them, but they aren't my thing. In discussing this with a friend she said I was missing out on some great stuff. So being the trusting person I am I gave her free reign to pick a book I wouldn't normally pick, and Juliet Immortal was one of her 3 picks for me. And now I must, with egg in my face, say a very heartfelt thank you to her because this book was flipping fantastic! It was one of those fantastical books that you want to take your time with yet you don't want to put it down and the fact that I almost missed out breaks my heart.

Juliet Immortal is the story of well, Juliet, yes, that Juliet. But it isn't the same old story you are used to. You see, this Juliet is dead, but she dead at the hands of Romeo. He made a deal in those ole Verona days that granted him immortality if only he would do dear Juliet in. What Romeo never considered was that there may be a deal on the table for Juliet as well. Now 300 centuries later these once star crossed lovers are battling on opposing sides in bodies that aren't theirs. Juliet is sent to earth to protect the live of soul mates and to make sure their bond holds strong while Romeo is sent to destroy the powers of love. It has been this way for years, that is until Juliet is sent into the body of Ariel and everything changes. Not only does Juliet have a job to do, but she has a soul to heal, and it isn't just Ariel's soul that needs healing. Soon both Romeo and Juliet have to make choices that neither want to make, but sometimes making choices is the only way to live.

I know, amazing right?! Trust me when I tell you that not only is this story pure awesomeness, there is a ton more to it then I just described. The writing is stunning. It really is filled with some of the most gorgeous prose I've read and I don't throw that our there lightly. I absolutely loved every character in the story even the annoying ones and that is a testament to Ms. Jay. You could tell that everything she did was well thought out and served a purpose. Nothing was predictable, okay, maybe one thing ones, but this is my gush review so I'm ignoring that.

Anyway, this book basically took an old familiar classic and made into something I could have never dreamed to love as much as I did. Just do me a favor, take a chance and read it. You won't be disappointed, I can almost guarantee it.
Tweet