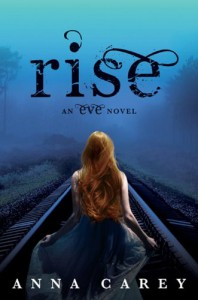 I read both Once and Rise back to back so it is hard for me to write different reviews since I had very different feelings on both books. Once for me had the same feeling that Eve did when I read it. It was about the relationship of Caleb and Eve. It was about Eve hiding from the King and what it means once she is confronted with him. It was about Eve’s guilt over leaving her friends behind in Eve and how to make amends for it. It was about sacrifice and love and truths. It was a pretty great book. But then I read Rise and all of those feelings went by the weigh side. You see everything that Eve and Once were, Rise was the complete opposite! Rise actually managed to make me mad that I wasted my time with the series and that is a task that was accomplished in about the last 15-20% of the book.

When I first finished Rise I was in shock. Total and complete shock. I couldn’t believe I had read what I just read. Did I like it? Did I hate it? Was I meh about it? Well the more I thought about it the more I realized I was angry about it. I invested months if not years waiting for the series to be done. Days were spent reading them and Rise is what I got? Are you freaking kidding me?! That was my final thought when everything that happened in the book settled. That and would I hurt my wall if I flung this thing!

Basically when it comes down to it Rise was a major disappointment and it all comes down to the final 2-3 chapters. What should have been the finest hour was a letdown of epic proportions that involved no emotional connections, no smiles or happiness even when there seemed to be a happily-ever-after of some sort; it just didn’t matter what happened to the characters by the end because it all seemed so detached. I felt like the third book lost focus on what the series was about and that both angers and saddens me. That spark that I found in Eve and in Once was gone and instead we were left to go through the motions which isn’t fair to us as readers who have put our time and energy into caring about these books/characters. The towel seemed to have been thrown in and sadly I felt like I was the victim and that’s not a feeling anyone wants to have when they finish reading a series they were actually excited about a couple years ago.

In conclusion, although Eve and Once were pretty great stories with surprises and twists and characters I really enjoyed Rise was nothing of the sort. I feel cheated and honestly I’m not sure I will recommend this series to anyone after the feeling I was left with when Rise ended.
Tweet