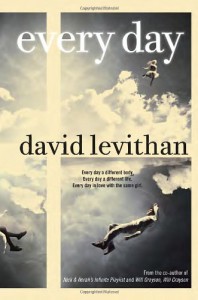 Very interesting was my first thought when I finished this book. Honestly I couldn’t really think of anything else but interesting. I’m not sure why. It was a great book and written beautifully, but that was all I had. Maybe because I knew from the start it had nowhere to go, that there could never been a resolution because of the circumstances. Don’t get me wrong I enjoyed this book immensely, but I also felt like I was reading towards a dead end and I think that took away just a little in the long run.

Every Day is about A, a boy that can never have a life of his own. Every single day he wakes up in the body of someone else and stays there for roughly 24 hours. He has no family, no friends, no home. His life is the life of others and he has become okay with it. Has made his peace with the fact that it is the way it is. That is until he meets a girl and everything changes for him. Instead of living the life of the body he is given for the day A starts to do things just to see Rhiannon. No matter where he is, who he is, everything begins to be about her. But when A uses the body of someone to see Rhiannon and they start to put the pieces together and figure out what is going on A is in an area he has never known before and he must decide what is more important his secret or his love.

I liked A, I really did. He was complex but vulnerable at the same time. He saw life in a way that others just can’t. In his world there were no boundaries, no outside packages. He saw what a person was like on the inside and didn’t understand why people couldn’t do that. It really was a very interesting take on the age old saying “judge a book by its cover” because the cover was people. And since A was never the same person twice it was hard for him to get that it was easy to judge someone by looks and not who they are. The talks he had with Rhiannon about this were fascinating as the reader got to see both sides of the coin. And I love A and Rhiannon together no matter who he was that day. But again I’m brought back to the dead end. I just couldn’t get past that line of thinking that it just couldn’t go anywhere good.

I will say having only read one other Levithan book, Will Grayson, Will Grayson, and not really liking it all that much, Every Day was a FAR better choice. It had a beautiful story with great characters that was masterfully written. It made me want to read more by this author and erased the awkward feelings I had after Will Grayson. Now that right there makes this worth the read alone.