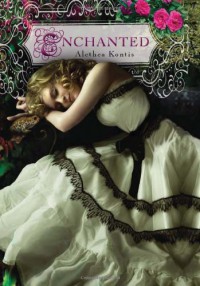 I’m not really even sure what to say about Enchanted. I liked it enough, but I didn’t go crazy about it or hate it so much that I couldn’t finish it. It was my June personal challenge book based off a suggestion, and it was good for what it was, but I’m not sure how I felt about parts of the book.

Enchanted is a cleaver take on a retelling of fairytales. It’s the story of Sunday Woodcutter, the 7th daughter of the 7th daughter. Sunday is very different than her other weekday named sisters. She likes to tell stories and those stories have the tendency to come true. When she meets a frog in the woods they make a fast friendship which turns to more. And when Sunday kisses the frog the enchanted he had been under is lifted and he is revealed to be the Prince Rumbold. As secrets in both Sunday and Rumbold’s lives begin to unravel the two could be lovers must decide what to trust and what to believe and if the attraction they feel is worth it.

Truthfully I liked the parts that involved both Sunday and Rumbold together. I found them kind of dull when they were apart, Rumbold more so than Sunday. When they were together there was some kind of magic in their dialogue that helped move the story along. When they were apart I felt like the action dragged and nothing much was going on. I wasn’t really interested in their lives outside of each other. Like I said though, Rumbold was worse than Sunday. At least Sunday was the cool kid of “mother goose” living in a shoe like house with all sorts of magical powers in it. Between that and the family secret that came to life with the arrival of her fairy godmother, it moved along okay pacing wise. Rumbold on the other hand was kind of painful to read. His solo parts seemed to just drag with nothing going on other than him being tired and out of strength. That part felt long. But once all of that got out of the way there was a real story happening with even more secrets.

I think if that had been more of the book I would have been a bigger fan. Alas it wasn’t. But I will say that it was extremely cleaver to use the fairytales in the way they were. Some I was familiar with and others not so much. And I enjoyed the end enough to want to read the next book so that says something. Basically it was just an okay book for me that peaked my interest more in the latter chapters. I’m not in any rush but I definitely will be taking the second book out of the library.
Tweet