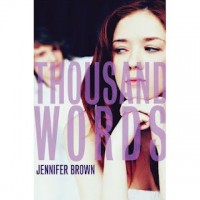 To say I’m a huge Jennifer Brown fan is a major understatement. Ever since reading Hate List I have loved her and her style of writing. To me she writes the things that needs need to be reading about. Whether it is a school shooting, an abusive relationship, a brother with serve OCD, Brown gets it and lets her readers get it too. And Thousand Words falls right into that category. It is poignant and really makes you look at decisions teenagers make that can potentially effect the rest of their lives.

Thousand Words is the story of Ashleigh. Ashleigh is a typical teenager enjoying her summer before starting her junior year in high school. She is on the track team, had a core group of friends and a boyfriend that is off to college in the fall. At a party one night Ashleigh is convinced by her friends that she should text Kaleb, her boyfriend, a picture of herself naked so he has something to remember her by in college. Somewhat drunk Ashleigh does it never once thinking of the ramifications. When Kaleb breaks up with her and they have an argument he does the one thing he can think of that will mortify her beyond belief, her sends the picture to people. As more and more people pass the picture on Ashleigh’s life spirals out of control. She loses friends and her family no longer trusts her. And when the police get involved no one’s life will ever be the same.

My heart really went out to Ashleigh. There is no doubt in my mind that she made a dumb decision. She thought she was doing something amazing for her boyfriend. Thought she could trust him. She made a horrific mistake, and that mistake cost her dearly. She paid for that mistake with her privacy, her friends, her family, her life. But she also paid for it legally too and that just made me sad for her. Out of anyone involved I felt like she paid the biggest price and took responsibility unlike the other people involved. She owned up to her mistake and continued on with her head held high. She took the comments thrown at her, the looks shot her way, the abuse, and swallowed it down. She didn’t try to place the blame on others. She didn’t say it was all because of Kaleb. She knew her part in it and accepted it. All she wanted were the others involved to do the same and that was where my heart went out to her. Kaleb showed no remorse at all for his actions and that really angered me. Not to mention her friends for goading her, or the people that passed the picture on over and over again. Her life would never be the same from one mistake and I felt bad for her.

I also really liked Ashleigh’s relationship with Mack. I honestly found the after the photo Ashleigh to be better than the before the photo Ashleigh and I wonder if that was because of Mack and the friendship he gave her when she needed it most. There was something so innocent about the two of them that I really enjoyed. Mack was exactly what she needed and at a time when she had no support and no one to trust. And reading Mack’s story unfold and getting to know him better was perfectly done as well. And the bonus was that it wasn’t a romantic relationship which I was scared it would go there, but it didn’t. Brown stayed true to her main character which then stayed true to this avid reader.

Honestly I waited a really long time to read this book and it was worth every second of wait. Brown continued to do what I expect of her and what I look for out of her in the future. I’m not kidding when I say her books should be on summer reading lists everywhere because she gets it and I think teens will too. I know I did and I’m in my 30s. Bravo Ms. Brown!