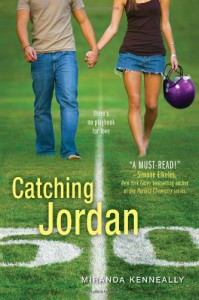 To say I was excited for this book is an understatement. A book about football and cute boys? Sign me up. I mean how could you go wrong with two of my favorite things! And Kenneally didn't let me down. She took what could have been a typical story of finding out what you wanted may not be what you need and made it into more than that.

Jordan is a funny, sassy, tough QB of her high school football team. She has the respect of all the guys on her team and her coach. She isn't a girly girl or a primper. She is a tomboy that loves the game of football and wants nothing more then to play college ball and to gain the support of her NFL pro father. She has worked hard for this, her spot in life and doesn't want it to be taken away. And then comes Ty. Ty literally flips Jordan's whole world around leaving her feeling like she was sacked in the end zone, changing everything she thought she knew and wanted and complicating things.

Complicating things even more is Henry. (And in a complete fan girl moment I must admit I am head over heels for him. LOL). Henry has been Jordan's bestie for ten years. The two of them are closer then close and when he starts acting weird Jordan is left grasping for something to hold on to. He backs off and Jordan freaks out because Henry is everything and I can't say I blame her.

I have to say my favorite part of this book was the friendship between Jordan and Henry.
I loved how they were with one another. It is very rare to find a friend that is your soulmate and I truly think these two were that for one another. Don't get me wrong, I enjoyed every character in this book. From the other guys on the team to the cheerleaders, to Jordan's parents. Every single one of them added to the story, but Henry and Jordan were the shining light.

Miranda Kennally's debut was an amazing mix of smiles and tears and laughter and yearning. Add in a Tom Brady and a Nomar Garciaparra mention and this girl is sold! Awesome awesome book. Can't wait for more from her.
Tweet