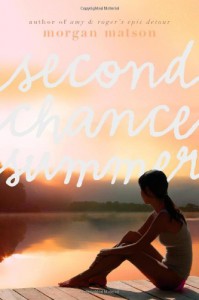 Some books reach you on such an emotional level that they quickly become a part of you. Second Chance Summer did exactly that. It was by far one of the most exquisitely written stories about love, loss, and second chances. It is a story of hope and trust and opening yourself up to the unknown even when it gets scary. It's a story of growing up.

I was immediately pulled in by the story of Taylor. Since she was younger the one thing Taylor was good at was running when things got hard. A middle child with a genius older brother and a ballet protege younger sister, Taylor never really found her place in her family. She felt like the let down, the disappointment, of the family. The only place she ever really felt like you fit in was at the lake house her family went to every summer until she was twelve. With Henry her first crush/boyfriend and Lucy her best friend, Taylor knew she belonged. But in her 12th summer, the last year they went to the house Taylor did something that split them apart and instead of sticking around to fix things she ran and never saw them again. Fast forward 5 years and Taylor's whole world is coming in on her. Her father has been diagnosed with Pancreatic cancer and only has the summer left. Wanting to spend time with the whole family they pack up and go to their summer house. Now Taylor is not only faced with the memories and people she once left behind with no explanation, she now has to face the fact that in a few short months she will no longer have her father there for her. In a summer of second chances and making memories Taylor has to decide flight or fight.

I really don't think I have the words to describe how much I not only loved this book but how it touched me in a way others books haven't. Pancreatic cancer has been a huge part of my life. I've lost someone very close to me to it and I know how devastating it can be to a family when it is not caught in time(which is the case quite frequently with this disease). Morgan Matson used this in a way that was both true and emotional and I could totally put myself in Taylor's place. It's a scary disease and it works fast and that was captured perfectly and in a way that I had never seen in a book before. One second Taylor's dad was fine and in the next he was in such pain he couldn't even talk. It was heart wrenching in a very very real way. That alone made me love this book in a way that I haven't loved anything else really.

Then there was Taylor herself. She was so terrified to get hurt, to live her life and own up to her mistakes that she constantly wanted to just run. She wanted to run far and she wanted to run fast. She had been doing just that all her life until her father, without knowing it, made her stand still. He made her go back to the lake house and face her demands and the people she had hurt in the past. Without meaning to her father taught Taylor to grow up and to learn that nothing was unfixable. Nothing was broken forever if you didn't want to be. And with Henry and Lucy there showing her that people deserved to get a second chance Taylor grew in a way that I never would have imagined.

I bawled my eyes out for about the last 30 pages of this Sarah Dessen meets Jenny Han book and it was by far worth every tear I shed. It was deep and funny and a real coming of age story. Morgan Matson hit it out of the park with this book and it was completely worth all of the good things I heard about it. One of my favorites of 2012 and I look forward to for from them EXTREMELY talented story teller!
Tweet