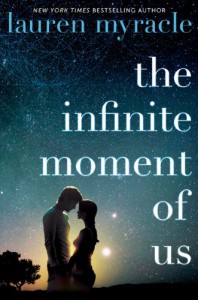 I had so many thought and emotions while reading this book and I’m not going to lie, most were not good. There was a lot that bothered me and it left a bad taste in my mouth which sucked because I loved this author’s other book Shine. Sadly this one just didn’t work for me. There was one part that made me pause and my blood pressure boil and after that it was over.

First let me start with what the book is about. The Infinite Moment of Us is the story of Charlie and Wren, two high school graduates from two different backgrounds, that become romantically involved. Wren has always been the good girl, the girl that has done everything her crazy, overbearing parents have asked of her. She has basically lived their lives for them never getting to do anything she wanted or make any of her own mistakes. Then you have Charlie, the foster kid. The kid that had a rough life growing up until he met Chris and Pam his current foster parents. Both ready to embark on life after high school, Charlie finally gets up the nerve to ask Wren out after wanting her for so long. With summer stretched out ahead of them they are in for a journey they may never have expected and a love like no other.

Oh, where to start, where to start. I guess I’ll start by saying I had high hopes when the book got going(I found the beginning to be slow) and started to remind me of Judy Blume’s Forever. It seemed to be a coming of age story of two kids at the sexual awakening. One innocent and uncertain and one more experienced and ready but not pushy. It felt like a new telling of the classic Blume book. And then in a blink of an eye, a brush stroke of a pen, everything changed and that feeling was gone. Drama that seemed random and out of place was added and suddenly Blume was gone and what was left was a jumbled of things that just didn’t add up. The book became a mockery of itself in my eyes and I don’t know if it was because it really was or because of one scene that I hated so much I couldn’t like anything after reading it.

SKIP NEXT PARAGRAPH TO BE SPOILER FREE

I’m a strong believer that sex belongs in YA books if it fits since most teens are probably sexual active. There is a place for it in YA literature but it has to be done responsibly and done right. Up until a point in this book I thought that it was. Wren went on the pill, discussed sex with her best friend, even somewhat discussed it with Charlie. She told Charlie that she wanted him to get tested since he wasn’t a virgin which was the right thing to do. And then she had to ruin it and tell him that she wanted her first time to be without a condom. That put me completely over the edge because I think that is a horrible message to put out there to young readers. Even with Wren on the pill and Charlie having been tested there is still a chance that Wren could get pregnant and it is irresponsible for that to not have been mentioned or even hinted at. Not to mention the fact that even if Charlie’s tests came back negative for HIV he would need to be tested again in 6 months to be 100% sure he was uninfected. To me this was a HUGE oversight by the author, the publisher, the editor, anyone that read this and didn’t bring up this fact. Teenagers need to know these things and if reading a YA fiction book is what gets them to know the facts then so be it. It disgusted me that it was made to be okay that these two young people were going to have sex without a condom because a test came back and a birth control pill was swallowed. I apologize for the rant, but I had to get that out.

Basically, The Infinite Moment of Us was not a book I enjoyed in the long run because I couldn’t get passed certain things that made me cringe and I couldn’t shake. I’m not going to tell you not to read it because you need to make up your mind yourself.
Tweet