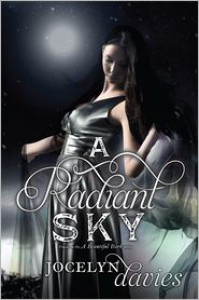 I had no idea I would like books about angels until I, basically by accident, picked up A Beautiful Dark. You see, I had no idea the book had anything to do with angels and paranormal events. I thought it was a contemporary so imagine my shock when it was anything but and imagine my greater shock when I actually enjoyed it. Having been a fan of the first book and a HUGE fan of the second, A Fractured Light I was so grateful when an early copy of A Radiant Sky was placed in my hands. And although not my favorite of the series, I know, I know, endings are hard, I think it fit nicely with the other two parts and I loved the series as a whole.

A Radiant Sky picks up where A Fractured Light left off. Sides have clearly been drawn between the angels and Skye is once again stuck in the middle, somewhere between light and dark, and she is pressured to pick a side. Devin, once part of the Order is now a member of the Rebellion and Asher still holds the key to Skye’s heart. The problem is that Skye doesn’t trust either side so she decides to go it alone. To take on both sides even if it puts her life in danger and breaks her heart over Asher. Stronger than she has ever been Skye has the fate of the world on her shoulders. But if she wins will Asher still be there waiting for her?

Like I said, this definitely wasn’t my favorite of the 3 books. I enjoyed it and read it fairly quickly, but I just felt like something was off. I don’t know if it was because of the lack of Skye and Asher interaction, or Devin now being on Asher’s side, or the addition of Raven into the fold of things. It just felt like too much of it was just convenient, which I understand to a point. Things need to be wrapped up in a 3rd and final book, I don’t deny that. I just wish it didn’t have to be so neat. I think that was my main problem with A Radiant Skye. The story was great, the characters were just as strong as they were in A Beautiful Dark and you could see the whole picture. I think that I just didn’t like the neatness of everything. I wanted more drama, more heartache, maybe an extra unhappy ending.

But with that said, I didn’t hate this book at all. I think it was a great part of Skye’s story and love that Davies brought her kind of full circle in a way. She grew as a character from page one of A Beautiful Dark to the final page of A Radiant Sky and that was apparent and made me happy to have been a part of this journey. Would I recommend the series even with my annoyance at the neatness? 100%, hands down, yes. Definitely worth the read and I look forward to what Davies has for us next.
Tweet