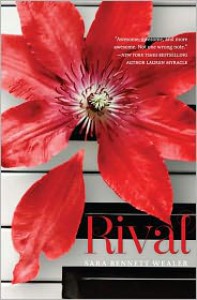 If any of you have been following my reading progress on Goodreads it was made very very clear that this book and I did not get along. I didn’t hide my disdain while reading it, but I finished it to give it the benefit of the doubt. Sadly my opinion did not change by the end. I found the whole story, the characters and the plot points, underwhelming, annoying and a tad predictable. I must apologize if this is slightly spoilerish.

Rival is about two girls, Brooke and Kathryn, that dream of winning a highly respected singing competition in their small town in Minnesota. As freshman they are both accepted into the honors choir program(something basically unheard off), but that is their only connection. They are from two different worlds, Brooke being popular and Kathryn a loner. But that all changed Junior year when Brooke’s friend Chloe comes up with the an immature idea to “draft” new friends. Because of this Brooke and Kathryn become fast friends and even sooner they are each others worst enemies. Thanks to a lot of outside sources and incorrect information and selfish acts they are officially rivals and only one can win the competition. Bet you didn’t see that coming.

The book is told from alternate view points(which I normally enjoy) and alternate time periods, from Junior year to Senior year. Through the switch you learn not only what lead to the fight and how they not only became friends but what each girl is thinking and feeling as the friendship falls apart. With this style of story telling normally you can really get to know both characters the author is trying to showcase. You get to see what is going on in their lives and what is in their heads. It is a highly effective way to progress the story in most instances, a way to really get to know the characters. The problem is I didn’t really like what I got to know.

To be honest I couldn’t stand either girl. I could tell that I was supposed to like Kathryn because she was the one being “bullied” and I was supposed to feel bad for Brooke because she was just trying to save face, but both girls were so self centered and juvenile that I found myself rolling my eyes and wanting to throw my NOOK. Kathryn thought everything Brooke did revolved around her. Sure Brooke embarrassed her when she ended their friendship, but Kathryn took it too far. It was like the world revolved around her and she was waiting for her just due. She treated her best friend Matt like crap, was somewhat rude to her parents and was so paranoid it made me crazy! And then there was Brooke. Her brothers were immature and kept hanging at high school parties even though they were in like their 3rd year of college, her mom thought she was one of the “kids” letting all Brooke’s friends drink and party at the house and her dad ran away with a famous actor forcing the whole family to move from NYC to Minnesota. Fine, she had the poor little rich girl thing down. The problem was I didn’t believe it. She kept saying music was what she wanted but never would stand up to her over the top, annoyingly sneaky best friend Chloe. Brooke thought she deserved things like understanding and respect, but she never gave any to get any. They both just rubbed me the wrong way and made it impossible for me to believe in their once friendship or their rivalry.

Now with all of that said I want to make it clear that it really wasn’t a bad book. It was written well and a fast read. And I’m more then positive that it would be enjoyable for others. It just wasn’t the book for me. I didn’t connect with it no matter how much I tried. So don’t take my word for it. Try it out and you be the judge. Maybe it will be the book for you.
Tweet